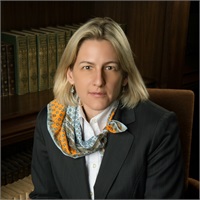 Following graduation from the University of Alabama in 1993, April began her career in the financial services industry in the fall of 1997 at JC Bradford & Co. in Mobile, AL, just prior to one of the most turbulent periods in stock market history.  She witnessed first-hand the dot com bust, the aftermath of Sept. 11th, and the mortgage meltdown and credit crisis of 2008-2009; three major stock market events occurring in the span of a single decade.

After 15 years of experience at Wallstreet and regional firms, including tenures at PaineWebber, UBS, Morgan Stanley, Morgan Keegan, and Raymond James, April transitioned to the independent side of the industry with Atlanta-based JP Turner in 2013.

April’s observations of the first decade of the 21st century has heightened her awareness of the need to educate clients to embrace risk management principles and techniques, including the use of alternative investments, dollar cost averaging, and technical analysis.

April enjoys teaching stock market concepts to college students and clients of all ages.  She is an avid reader and health enthusiast.  In her spare time she enjoys creative pursuits such as writing, art, gardening, and spending time with family and friends